The underlying principle behind sportokinesis is that of controlled kinesis. Each movement whether it is cutting, accelerating, braking, jumping or throwing is built upon simple movement patterns and control. ents before putting the body under progressive load, during childhood, but in the same way few people are coached how to run, these movements almost precede this.

Sportokinesis uses a progressive and comprehensive series of movement training to achieve this competence. In injury prevention and sports performance these are complimentary and can be introduced simultaneously and at different levels. In rehabilitation from injury they are designed to be progressive and sequential from basokinesis through orthokinesis to klinokinesis.

Unlike weight training, this is controlled muscle activation training designed to assist sequencing, activation and muscle power generation where stabilisation muscles act in synergy with prime movers, to maximise performance. 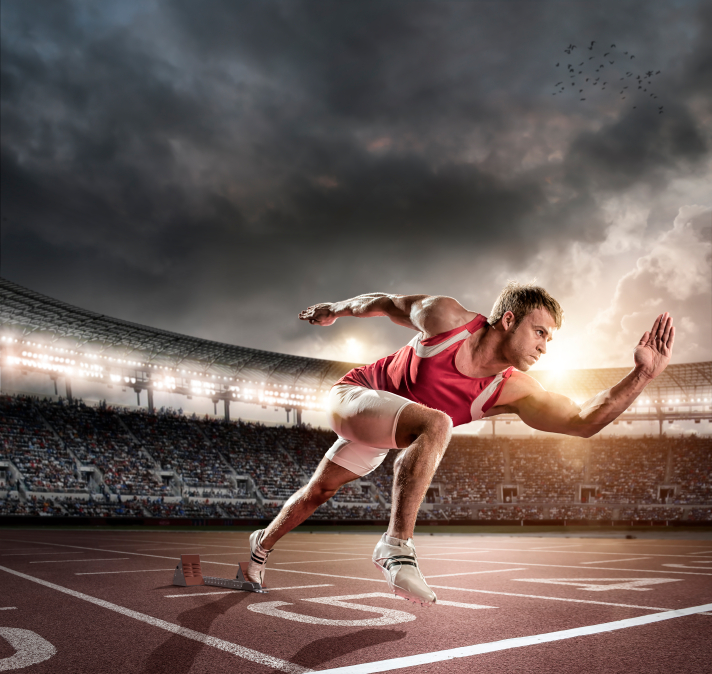 The control of movement in response to a controlled stimulus. These movements are often single joint, single plane and the focus of training is on the activation of muscles to control the movement with little outside influence. Usually on a stable surface, with little mental and physical distraction and commonly not exercising a joint through a full range of movement.

The speed of control is relative to the stimulus. Here the emphasis is still on the level of control as in basokinesis but with added stimulus of either an uneven surface or increased load, requiring the stabilisation muscles to work faster in a more dynamic level. This progresses the athlete onwards in terms of challenge and towards more activity related exercise.

The rate of change of intensity or directional control is proportional to the changing stimulus. Here training is focussed on more reactive and sport specific skills. These can still be slow movements but with rapid control in the same degree and manner of the previous levels, but with uneven loading, heightened speed or reactive pace. Or high speed movements with uneven load requiring the highest level of stabilisation to generate maximum power and absorb load. These are the final stages in a sport specific warm up allowing safe play, or prior to commencing a return to play programme in rehabilitation.