FASCIAL STRAINS: DO THEY EXIST?

Fascia is a connective tissue fibrous membrane that surrounds muscles, groups of muscles, blood vessels, and nerves, binding some structures together, while permitting others to slide smoothly over each other. There are many theories as to lower limb fascial function including the hydraulic amplifier effect with respect to lumbar fascia, the crossover effect in support of bipedal motion; and tensioning theory. Schleip,et al have demonstrated contractile properties of fascia and Barker and others have demonstrated discrete collagen fibre orientation.

a common injury seen in sportsmen and women. The majority of acute posterior thigh injuries involve the hamstring muscle group although local pain from other injured structures as well as pain referred from the lumbar spine may also present in this way.

A review of the literature shows that 15-20% of acute presentations of posterior thigh pain are imaging negative for hamstring muscle trauma. This non-muscle-related pathology is generally regarded as being neuro-meningeal in origin although technical and operator-dependent imaging problems may complicate these studies.

The variable nature, thickness, collagen density and fibre orientation of facia at different sites in the posterior thigh, particularly in the central zone certainly suggest more than a passive role and the observation of pain receptors within the fascial layers of the posterior central thigh give a mechanism of pain.

In addition to the intra-fascial pain receptors, there are a number of perforating fibres (as well as vascular structures) running from the posterior femoral cutaneous nerve through the fascia to more superficial structures.

Dr Eanna Falvey and I carried out gross anatomical and microscopical studies on the posterior thighs of 20 adult, formalin fixed cadavers. The configuration, anchors, and related structures of the deep fascia of the thigh were examined. Neural structures of significance in the area were identified and their relations noted.

Ultrasound-guided injection of normal saline to the supra-, infra- and infero- fascial plane was performed on athletic volunteers. This allowed a differentiation between the fascial interface at different sites around the lower limb.

Twenty cadavers from the Department of Anatomy, University of Melbourne were dissected (40 limbs). The fascia of the posterior thigh is morphologically dissimilar to that seen elsewhere in the proximal lower limb. The homogenous, smooth texture of fascia seen elsewhere is replaced with a more friable structure, which is firmly tethered to the skin, especially at the buttock crease (Fig 1).

Histological specimens show that ‘digitations’ link the fascia to skin through subcutaneous fat. The posterior femoral cutaneous nerve was located superior to the biceps femoris muscle belly. A number of perforating nerves were seen to accompany blood vessels passing through the fascia to supply the skin (Fig 2). 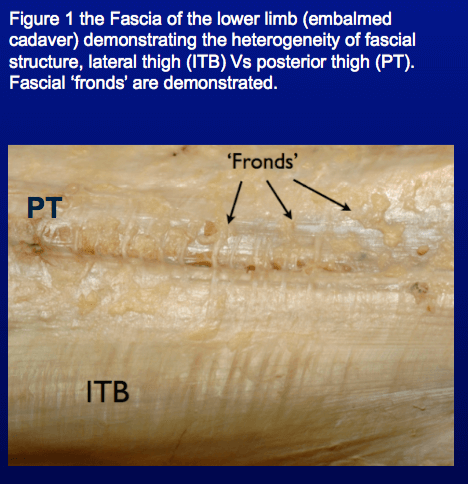 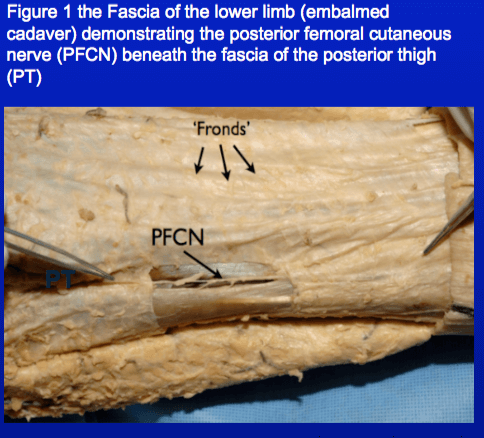 The fascia of the lower leg was easily separated form underlying muscle when saline was introduced to the potential space at all sites. Overlying subcutaneous fat was also easily separated from the fascia at al sites except the posterior thigh. Here the interface was less well defined and structures failed to separate satisfactorily. (Fig 3)

‘Perifascial fluid’ is often seen on magnetic resonance imaging or ultrasound in the setting of acute hamstring muscle injury. This may represent a means of migration for inflammatory cells to the damaged area, of muscle and fascia. This injury may be a trigger for a chronic fasciitis similar to plantar fasciitis. Further work by the authors has shown that myofibroblasts present in fascia give it potentially smooth muscle-like contractile properties.

The proximity of the posterior femoral cutaneous nerve (PFCN) and its perforating branches to the overlying fascia, expose it to injury when haemorrhage or inflammation occurs. PFCN damage may result in recurrent posterior thigh pain, in the absence of noticeable sensory loss.

In dissection studies we observed the morphological observation in the central posterior thigh fascia  of transversely orientated ‘digitations’ of connective tissue extending from the superficial fascial layer through the subcutaneous fat toward the skin in a manner similar to the connective tissue seen as Cooper’s ligaments in the breast.

We postulate that these ‘digitations’ may represent the focus for a shear forces occurring between the fascia and the skin/subcutaneous tissue seen following injury at the hamstring muscle-fascial interface where adhesions or fibrosis result in adherence of these structures. Previous studies have demonstrated that damaged fascia is subject to pathological inflammation and fibrosis.

A further observation that may influence this process is the histological evidence of the presence of myofibroblasts in fascia, which have been shown in the past to confer a smooth muscle-like contractile function.

While strain injuries of the lower limb fascia have been accepted as a clinical entity by many clinicians, particularly since they have been demonstrated on MRI, very little is written about them. A search of PubMed and Google Scholar failed to reveal a single article devoted to fascial strains.

Since the advent of MRI, involvement of the fascia in lower limb muscle injuries has become evident. In muscle strains it is not infrequent for the fascia to be damaged as well and it is common to see fluid in the fascial planes.

Occasionally when an MRI is performed for what appears to be a minor muscle strain, an isolated fascial strain is demonstrated without any injury to the muscle itself. The typical MRI appearance of a fascial strain is shown in Figure 1. 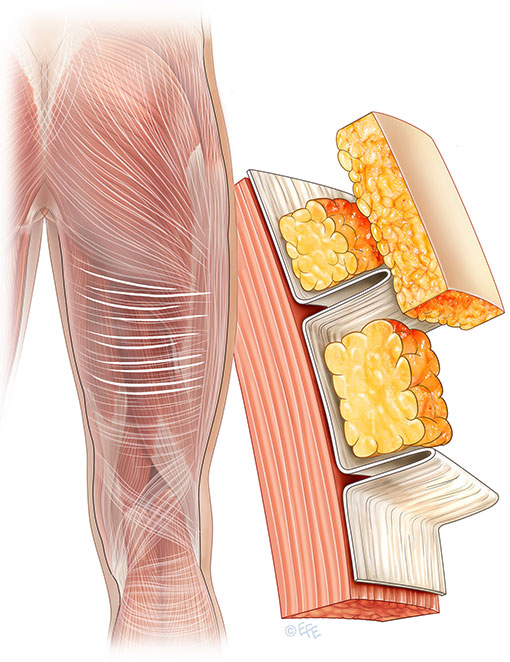 It has been shown that the fascia that surrounds the muscles of the lower limb is continuous with the thoracolumbar fascia proximally (rand the paratenon of the achilles tendon distally (Franklyn-Miler et al, BJSM 2009).

Fascial strains are an entity of their own and can be identified on MRI. They can be distinguished clinically from muscle injuries by the absence of local tenderness and maintenance of muscle strength. This is an important clinical distinction as a muscle tear will require time out of the activity, whereas a fascial strain can be managed with minimal absence from exercise.

There may be a role for sub fascial local anaesthetic and perhaps volume dilatation of saline to prevent the adhesions between fascial attachment to muscle.