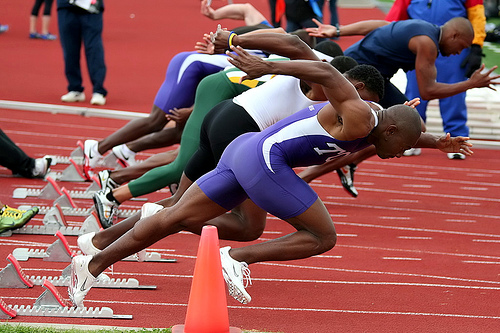 It is well known that some hamstring and quadriceps strains take much longer to repair than others, and some injuries are more prone to recurrence. A number of thigh muscles including the biceps femoris and rectus femoris have significant intramuscular tendons. Improved resolution via MRI and anatomical dissection studies provide evidence that in many muscles, the tendon extends within the muscle belly, and these muscle belly injuries occur at an intramuscular myotendinous or myoaponeurotic junction. The intramuscular tendon (rachis or aponeurosis) acts as a central supporting strut to which the muscle fibres attach. Failure of the myofibrillar attachments may occur along the intramuscular tendon (or aponeurosis). These tendons are a common site of myotendinous muscle strains. However, intramuscular tendon injuries have received little attention as an element in ‘muscle strain’.

The failure of the myofibrillar attachments often occurs in a zipper-like fashion with oedema and blood products tracking alongside the torn muscle fibres. The effect is a characteristic feather-like appearance on MRI and ultrasound scans. Recently, injuries to the intramuscular tendon itself, often in association with a musculotendinous injury, have been identified.

This review aimed to examine the evidence to support the view that muscle injuries involving damage to the tendon itself are more serious than those affecting the myotendinous junction only.

A number of MRI studies confirmed that the majority of hamstring muscle injuries occurred at the myotendinous junction of the intramuscular tendon and described the characteristic appearance on MRI of a feather-like pattern of oedema. Several studies demonstrated that injuries that extend into the tendon were associated with a substantial increased risk of recurrence of injury and an increased time to return to full training.

Prolonged recovery time and higher rate of injury recurrence both have enormous clinical implications especially for the elite athlete. There is a vigorous debate about the utility of MRI in hamstring strain. In this clinical setting, the authors argue that high quality MRI is indicated to identify possible tendon disruption that accompany biceps femoris injuries. A positive diagnosis would influence management.

It was hypothesized that the intrasubstance quadriceps strain injury that occurs in the mid-muscle belly involves disruption of the muscle fibres at the deep myotendinous junction of the indirect head with distal retraction of these fibres. The typical MRI appearance of this injury is a ‘bulls eye’ appearance which refers to an injury associated with enhancement of signal about the central tendon on T1-weighted scans after intravenous gadolinium. The clinical importance of this intramuscular tendon involvement is shown by the prolonged rehabilitation time in this group of patients. 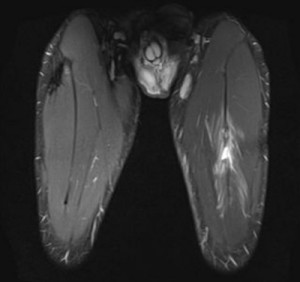 Improved recognition of injury of the intramuscular tendon may allow more accurate prediction of time to return to sport and thus, reduce risk of recurrence. Future research should aim at better understanding the involvement of the intramuscular tendon in muscle injuries, and investigating appropriate treatment interventions for this particular group of muscle injuries.

At present, optimal management of the injuries that involve a significant tear of the intramuscular tendon is unclear. There may be a role for surgical repair, and this warrants further investigation specifically addressing RTP and reinjury rates in comparison to conservative care.