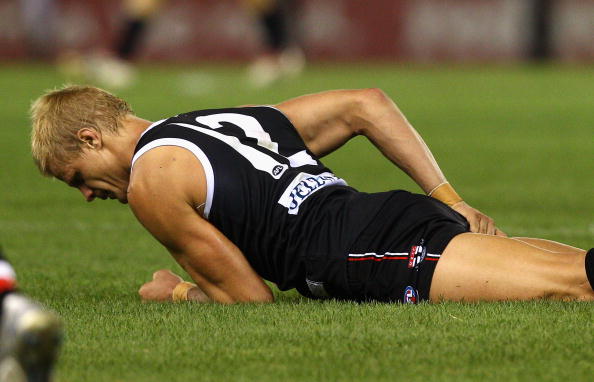 Reinjury rates after acute hamstring injuries are reported to range from 14% to 63% within the same playing season or up to 2 years after the initial injury. Despite relatively high reinjury risk after hamstring injuries, there is a lack of exact knowledge about their severity, location, and timing. Thus far, the location and severity, in terms of the radiological extent, and the timing of MRI-confirmed reinjuries compared with MRI-confirmed index injuries have not been described.

The purposes of this descriptive study were to investigate the location, radiological severity, and timing of reinjuries on MRI compared with the index injury.

Between January 2011 and June 2014, athletes with acute onset of posterior thigh pain were consecutively recruited. Within 5 days after injury, the treating sports medicine physician performed standardized comprehensive patient history taking and clinical examinations, including pain with hamstring range of motion testing, pain with manual muscle resistance testing, active slump test, and pain with palpation. MRI scans of the hamstring muscle were obtained from the ischial tuberosity to the knee using a 1.5-T magnet system with a body matrix coil. A single experienced radiologist with >10 years of experience within musculoskeletal radiology assessed and scored the MRI scans and determined the localization and extent of the injury using a standardized scoring form. The number of days until registered return to sports (RTS) was provided by the club medical staff was registered.

The biceps femoris muscle was the most commonly injured muscle and was involved in 95% of index injuries (n = 18) and 79% of reinjuries (n = 15). Of the 19 reinjuries, 79% occurred in the same muscle and same location within the muscle as the index injury. The most common anatomic location within the muscle was the musculotendinous junction (n = 13; 68.4%), followed by the conjoint tendon (n = 4) and muscle belly (n = 2).

The authors concluded that the majority of hamstring reinjuries occurr in the same location as the index injury, and these reinjuries happened relatively early after RTS and with a radiological greater extent. The findings suggest that although the athletes were clinically recovered after their index injury and were cleared for RTS, biological and/or functional healing of the index injury might not be fully completed, leading to a reinjury at the index injury site. Specific exercise programs focusing on reinjury prevention initiated after RTS from the index injury are therefore highly recommended.

Wangensteen A et al. (2016) Hamstring Reinjuries Occur at the Same Location and Early After Return to Sport. A Descriptive Study of MRI-Confirmed Reinjuries. Am J Sports Med.