Ninety percent of patients with patellofemoral pain (PFP), a chronic musculoskeletal disorder characterized by anterior knee pain, are still in pain 4 years after the initial diagnosis. Specialists have optimized management of other chronic musculoskeletal conditions by subgrouping patients based on risk factors. While previous studies aimed to categorize patients based on imaging studies, this article assesses biomechanical risk factors through simple clinical tests.

After identifying the subgroups of PFP in the adult population, the authors aim to determine the relative frequency and exclusivity of each subgroup, crosscheck subgroup partitioning with hierarchical clustering and latent profile analysis and report common patient characteristics unique to each subgroup.

In a cross-sectional study, 127 patients between the ages of 18 and 40 who were diagnosed with non-specific PFP were assessed for demographic, clinical, and psychosocial characteristics. Eligibility was based on the duration of pain (≥3 months), retropatellar pain for two activities associated with PFP (prolonged sitting, climbing stairs, squatting, running, kneeling and jumping), and two clinical findings suggestive of PFP (pain on resisted isometric quadriceps contraction, palpation of the posterior patellar facets and squatting). In addition, each patient underwent seven clinical tests as seen in Table 1. 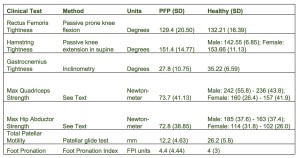 Table 1. Clinical Test Results of PFP Participants and the Healthy Population. When numbers are reported in a range in the healthy population, the first number is for the mean value for those under 30 years old, and the second value is for those over 30 years old. Of note, hamstring tightness was not found to be a significant factor in subgrouping methods.

Initially, subgroups were identified as clusters at least one standard deviation outside of the published healthy population. Next, data were analyzed using a hierarchical agglomerative cluster analysis, a partition based on similarity of variables, and a latent profile analysis, which calculates the probability of an individual’s membership to a subgroup.

The sample population was young (26±5.7 years), slightly overweight (25.4±5.83 kg/m2) and majority female (66%). Since the BMI of study population was higher, this study may not be appropriately applied to elite athletes.

As seen in Table 2, mean values of each subgroup depends on the subgrouping method. 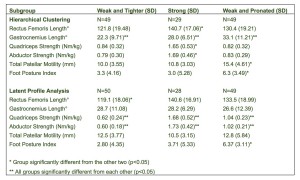 ‘Strong,’ ‘weak and tighter,’ and ‘weak and pronated’ subgroups were identified. The ‘strong’ subgroup had the greatest quadriceps and hip abductor strength and the most flexible rectus femoris. In addition to containing more males than the other subgroups, this subgroup had a lower BMI, higher physical activity level, lower pain scores, higher function and better quality of life. It was the most exclusive with high consensus between the three subgrouping methods. The authors suggest movement control is a possible intervention for ‘strong’ patients, since PFP is associated with poor neuromuscular control.

The ‘weak and tighter’ subgroup was less flexible with weaker quadriceps and hip abductors. Participants in this subgroup had a higher BMI, lower function, lower physical activity, and longer duration of PFP. PFP is a risk factor for patella-femoral osteoarthritis, and since a high BMI is associated with cartilage loss, future studies should investigate weight loss and strengthening exercises as a possible intervention for this subgroup. Unfortunately, subgrouping was not exclusive; in fact, half ‘weak and tight’ group are ‘weak and pronated,’ depending on the analysis method.

Finally, the ‘weak and pronated’ subgroup had the greatest foot pronation and patellar motility. This subgroup tended to be diagnosed with PFP at a younger age and had the shortest duration of PFP. Growth spurt issues may be the underlying cause of the ‘weak and pronated’ group, and because studies on adolescent knee pain suggest passive ankle dorsiflexion causes PFP, foot orthotics are a possible intervention. Similar to the ‘weak and tighter group,’ membership of this was split between hierarchical cluster and latent profile analysis

While many PFP therapies focus on hamstring stretching, hamstring length did not play a role in subgrouping.

Future work should identify if group-specific interventions superior to the standard treatment and determine if gender-specific etiologies of PFP exist.