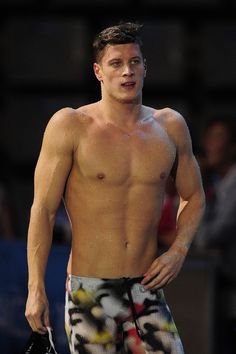 To improve strength and power, top-level swimmers commonly execute traditional strength exercises (i.e., bench press and squat) on dry-land. It is assumed that the training adaptations resulting from these nonspecific strategies are able to enhance swimming performance. Therefore, it is interesting to ascertain which dry-land testing and training methods provide results more closely related to performance in tethered and actual swimming. This would help coaches to choose the most effective, suitable and practical training strategies and exercises capable of eliciting adaptations with positive transference to swimming kinematic and dynamic characteristics.

It was shown that the mean propulsive power in the squat exercise and the total work during the countermovement jump presented high correlations with the average swimming force in tethered swimming. However, the relationship between the maximum strength capacity and the force-time curve parameters assessed by tethered swimming remains to be established.

The aim of this study was to test, in a sample composed of high-level young swimmers, the relationships between tethered force-time curve parameters and actual swimming performances for distances of 50, 100 and 200-m. Also, the study aimed to determine the exercises and the mechanical variables more closely related to tethered force-time curve parameters. Finally, the correlations between dry-land tests (strength-power exercises regularly performed by the investigated participants during their training routines) and specific swimming performance were investigated.

Swimming performance and tethered propulsive force were tested in a 25-m pool during the competitive period of the second macrocycle of the year, using only the front-crawl technique. 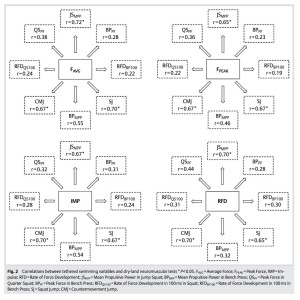 Propulsive force was evaluated by means of a fully tethered swimming system. The tethered system consisted of a load cell with 4 strain gauges and 2 000 N of maximum capacity. The test consisted of two 10-s maximal swims, with a 4-min passive rest between trials to prevent fatigue, at a self-selected stroke rate. In each trial, peak force, average force, impulse and rate of force development were assessed.

Swimming performance was recorded as the time to complete 50, 100, and 200-m, respectively, at maximal speed.

The maximal isometric strength was determined for the upper and lower limbs through bench press and quarter-squat exercises, both performed on a Smith-machine. Mean propulsive power was measured in the jump squat and bench press exercises, both executed on a Smith machine. Vertical jumping ability was assessed through squat jumps and countermovement jumps.

The strength of the relationships between variables obtained in dry-land strength and power exercises, tethered and actual swimming performances were determined by Pearson product-moment correlations.

The only dry-land variable significantly correlated with the actual performance in 50-m swimming was the jump squat mean propulsive power (r = − 0.70).

The findings show that, on average, there were large to very large correlations between actual swimming performance (in 50- and in 100-m) and tethered swimming performance.The variables collected in the lower limb power tests (in loaded and unloaded conditions) were largely to very largely related to the tethered swimming mechanical outputs.Tthe mean propulsive power collected during jump squats partly explained the swimmers’ performance in the 50-m freestyle.

It appears that the ability to produce higher levels of muscle power using the lower limbs – even in dry-land assessments/exercises – has fundamental importance in enhancing the sprint swimmers’ competitiveness.

Strength and conditioning coaches are strongly encouraged to implement strategies, such as loaded and unloaded vertical jumps, able to increase leg power in sprint swimmers.